Canadian Named President of the International College of Dentists 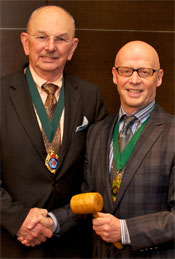 Dr. Garry Lunn of Vancouver, British Columbia, was elected president of the International College of Dentists (ICD) in November 2011. Dr. Lunn has vast experience in organized dentistry and has served in various capacities for the Vancouver and District Dental Society, the College of Dental Surgeons of British Columbia, the ICD and at the executive level for CDA. In 2001, Dr. Lunn received CDA’s Award of Merit, an award given to individuals who have served in an outstanding capacity in the governing of CDA and to Canadian dentistry.

Dr. Lunn’s objective as ICD president will be to raise the profile of ICD with the public and the profession, and to heighten awareness of the significant contribution ICD fellows make to humanitarian projects worldwide. In 2012, the Canadian ICD section will be supporting 8 missions in Canada, the Philippines, Vietnam, Brazil and Central America. “I encourage members to keep getting involved in the projects their section supports around the globe, be it financially or by delivering services,” says Dr. Lunn.

Established in 1927, the ICD is the largest international honorary dental fellowship, with over 12 000 members in more than 100 countries.

For more information on ICD activities, visit www.icd.org or www.icd-canada.com