A Tribute to Dr. George Peacock 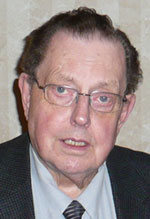 It was with great sadness that on November 30, 2011, Dr. George Peacock passed away at the age of 73. Dr. Peacock’s impact on the dental community, and on his community in general, was enormous. A native of Cobourg, Ontario, Dr. Peacock earned his DDS from the University of Alberta in 1962. He returned to Saskatoon and practised dentistry for 14 years.

On a personal note, he was a well-respected teacher, mentor, administrator, colleague and friend. George will be fondly remembered for his soft spoken manner, his subtle sense of humour, his “digital-like” memory, and his ability to craft and interpret bylaws. Thank you George for your contributions to the dental profession provincially and nationally and to the community in general. Your tremendous influence will live on!

Dr. Peacock is survived by his loving wife Emily, whom he married in 1963, and his 5 sons, Cameron, Bryan, Gregory, James and Brent.

– Prepared by Jerod Orb, executive director of the College of Dental Surgeons of Saskatchewan